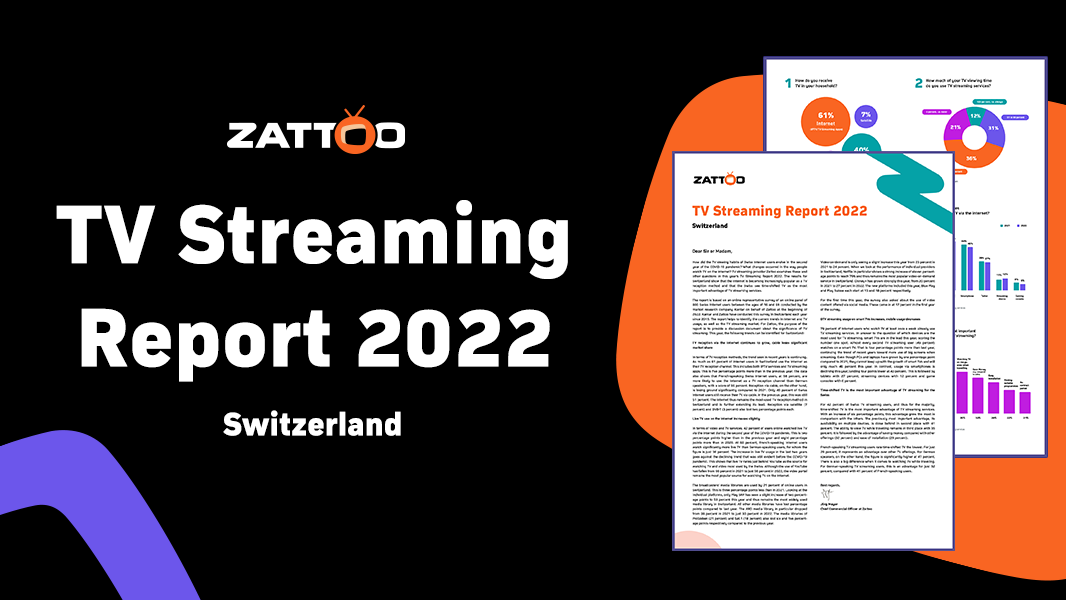 Zurich, 24 March 2022 – The internet remains the most used TV reception method and time-shifted TV is the biggest advantage of TV streaming services for Swiss internet users this year. This is the conclusion of the TV Streaming Report 2022 for Switzerland. The report is based on a survey that has been conducted annually since 2015 by Kantar on behalf of Zattoo. This year, 800 Swiss internet users between the ages of 16 and 69 were surveyed.

In terms of video and TV services, 42 percent of users online watched live TV via the Internet during the second year of the COVID-19 pandemic. This is two percentage points higher than in the previous year and eight percentage points more than in 2020. At 60 percent, French-speaking Internet users watch significantly more live TV than German-speaking users, for whom the figure is just 36 percent. The increase in live TV usage in the last two years goes against the declining trend that was still evident before the COVID-19 pandemic. This shows that live TV ranks just behind YouTube as the source for watching TV and video most used by the Swiss. Although the use of YouTube has fallen from 66 percent in 2021 to just 58 percent in 2022, the video portal remains the most popular source for watching TV on the Internet.

For the first time this year, the survey also asked about the use of video content offered via social media. These came in at 17 percent in the first year of the survey.

You can download the TV Streaming Report 2022 for Switzerland here